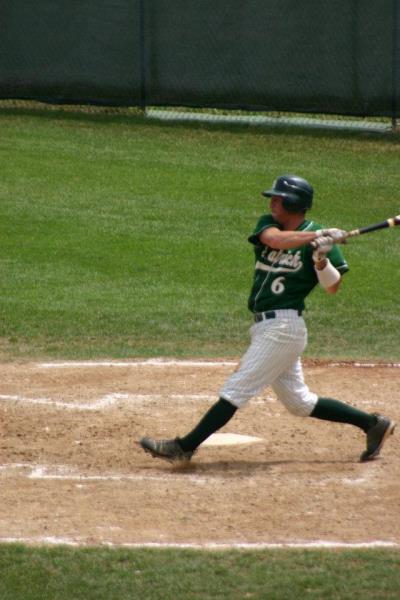 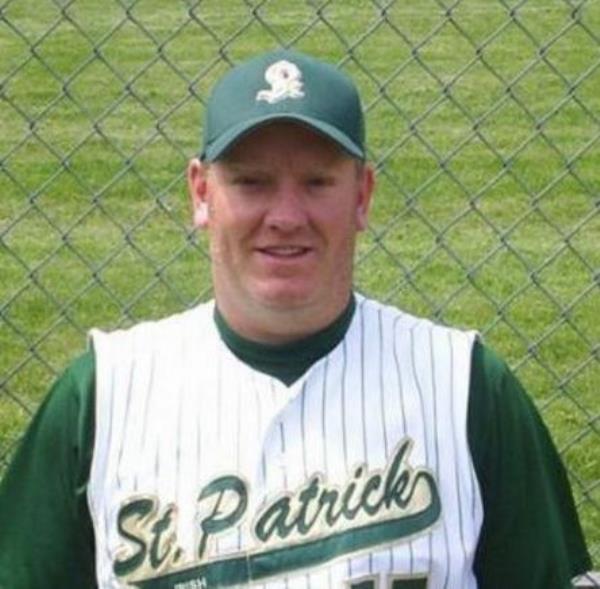 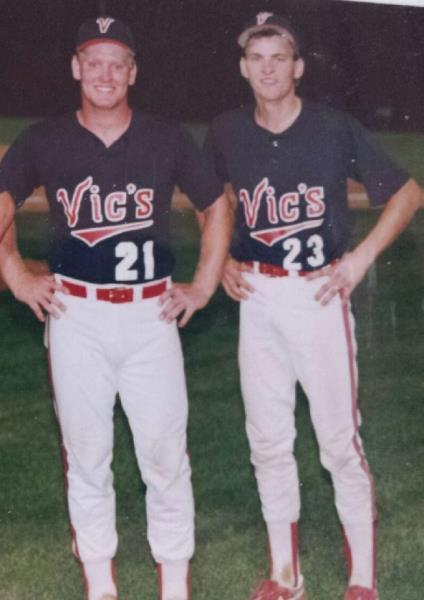 With the dawn of a new St. Patrick Irish baseball season on the horizon, baseball fans will be sad to hear that two long-time players have chosen to retire. Both Wade Schuknecht and Jeff Bjerke announced their retirements this spring, and have been given their Releases from the Irish. Both of their careers aligned with the most successful two decades in St. Patrick baseball history, and both will be missed on the field going forward. Wade may best be known for his incredibly smooth, quick hands and release, as well as the best middle infielder the DRS League has seen at turning the double play. Jeff Bjerke will go down as one of the most versatile defensive players and one of the best switch-hitting power hitters in the DRS League. I was able to ask both Wade and Jeff a few questions about their playing careers and what the future holds for them.

Wade signed with the Irish in the Spring of 1994. At the time of his retirement, Wade was one of the longest active players in the DRS League to have played with his original team (behind Mike Sandmann (Webster), Greg Faue (Prior Lake), and Scott Eischens (St. Benedict)). Wade began playing baseball in St. Patrick about 27 years ago via the youth teams; first Pee Wees and then Town & Country. His only real connection to St. Patrick at the time was due to his mother working with former Irish Manager, Jim Becker, who helped steer Wade to St. Patrick. After Town & Country, it was a natural and easy decision to continue playing with the Irish.

His early days with the team were frustrating, “I was too young to understand how everything worked and just assumed I would always play. Well . . . I didn’t.” That same year, now the current Irish Manager, John Johnson joined the team after playing for the Victoria Vics. Both vied for playing time at shortstop, but John got the nod at the position during the playoffs. The middle infield logjam became even worse when Jeff Bjerke joined the Irish in 1995 (more on that to come). Looking back now, Wade understands why his playoff playing time was limited in those early years, “I realize now it was because I was young and dumb and Johnny was much more trustworthy.” The long wait was finally over for Wade, when in 2004, 10 years into his Irish career, he started his first State Tournament game in Jordan. Until that point, the Irish had made the State Tournament three times in his career (’95, ’01, and ’02). He went on to start in eight more State Tournaments: ’04, ’05, ’06, ’08, ’11, ’12, ’14 and ’15. A truly remarkable career as Wade was  part of 11 State Tournament teams during his 22 years in an Irish uniform.

Four memories stand out when looking back on his career. The first being his first career home run, which came off of Terry Kalina of Lonsdale. “I remember it was a cold, dreary night and I was down 0-2 in the count. I think Terry struck me out my last ten times facing him. So he piped a fastball….again….down the middle and I got lucky and hit the sweet spot on my minus 5 RedLine aluminum bat and the ball creeped over the right field fence by inches. I may have been 20-years-old at the time.”

The 2006 State Tournament run was special. “The whole thing is a blur now, but that year of amatuer baseball was the best time on the baseball field in my life,” he recalls fondly. “The 2000 and 2006 squads were the two best Irish ‘teams’ that I was on in my career.” He stressed “teams”, as especially in 2006, the team wasn’t expected to do much, but they played baseball as a team and had great success.

In 2008, the Irish qualified for the State Tournament playing two games in Waterville, beating Lake Crystal 8-1 and mighty Blue Earth 10-1, a Blue Earth team that had won a State Tournament. As Wade puts it, “After that day, many State experts we spoke with predicted an Irish championship that year. Unfortunately, Elko beat us to it and we had to settle for 5th.”

Wade’s final cherished memory has been seeing his son Asher enjoy the sights and sounds of Bonin Field in 2015!

Wade went from an 18-year-old kid to a 40-year-old father during his years in an Irish uniform. Reminiscing about the culture of St. Patrick baseball, he focused on “team” once again, “There has been a slow change in culture from concerning ourselves with ‘team’ stats at the beginning of my career to everyone only caring about their own stats towards the end of it.” It’s something he wishes wasn’t the case. But a strong culture has been formed in St. Patrick, as he adds “I’ve seen so many fans and players come and go from Bonin Field, but it always seems there has been a core group that will always be there. We have created a winning environment at St. Patrick and that’s something we all can be proud of.” There may not be a bigger fan of Irish baseball than Wade’s dad, Lynn Schuknecht. “Dad has always been a huge supporter of Irish baseball and I think I’ve surprised even him at how long I’ve played.”

While Wade’s days with the Irish are over, he will transition to the 35-and over St. Patrick Shamrocks team full-time this year. He’s also looking forward to spending time with his family, including wife Brandi, and being a good father to his son Asher and baby girl due in July. “I’m actually a little excited to see what a summer is like without the grind of Irish baseball, but undoubtedly it will always be a big part of my life.”

Jeff grew up in South Dakota and went on to a successful college baseball career, beginning with Junior College at Des Moines Area Community College (DMACC) at the Boone, IA campus. From there he spent one year at Eastern Washington University in Cheney, WA. But after that season, the program was dropped due to Title IX and Jeff finished his college baseball career by playing two years at Wayne State in Wayne, NE. College baseball wasn’t the end though, as Jeff played one year of professional baseball in Swift Current, Saskatchewan, Canada. Professional baseball aspirations were dashed when a torn rotator cuff led to the team releasing him. As Jeff says, “I have played all over this great country and met a ton of great people. Baseball has been very good to me. I have played in every state in the continental US and 4 providences in Canada. You can’t believe all the experiences I have had! I have plenty of stories, some good and some not so good.”

Fast forward to 1994, when Jeff was playing amateur baseball in what turned out to be his last season with Victoria. It was a great year as Belle Plaine drafted him ahead of their State Tournament run and they went on to win the State Championship. The next year, Jeff signed with the Irish. John Johnson (Jeff’s cousin), who joined the team in 1994 and had also previously played with Victoria, was Jeff’s connection to the Irish. But another impetus to joining the Irish was Cyril Simon who made Jeff a lofty promise, “Cy told me he would find me a wife!” joked Jeff. Cyril wasn’t lying and held true to his promise, as Jeff later went on to marry Rena (Mushitz), a sister to Natalie (Mushitz) Simon, Cyril’s wife.

Jeff made a large impact on the team, among others, and in his first year with the Irish they made the State Tournament for the 3rd time in team history. While donning an Irish uniform, Jeff was part of 11 State Tournament teams, and was a Draftee for an additional two (Elko 1998 and Montgomery 1999).

Looking back on his playing days with the Irish, Jeff enjoyed all of the State Tournament runs and building close relationships with his teammates. But two plays in particular stand out as special memories; both of which were situations where Jeff “called his shot”. The first occurred in the 1995 Green Isle/Hamburg Tournament. The Irish were playing St. Cloud Orthopedic, and St. Cloud brought in a new pitcher to face Jeff in the 7th inning. On his way to the plate, Jeff told teammate Phil Sticha he was going to hit the first pitch over the scoreboard. Jeff came through, hitting the first pitch off the scoreboard! In 2005 in a game against Blue Earth, and after a long rain delay, Jeff told his teammates that if the pitcher threw him a first pitch curve ball, he was going to hit a homerun. Just like he did 10 years earlier, Jeff followed through on his claim and smacked a first pitch curveball over the scoreboard!

With an eye to the past, Jeff says Irish baseball (and amateur baseball in general), has changed, “The game isn’t played the same way we used to play it back in the day. We showed up early and stayed very late! We hated everyone we played and after, had no problem having a few [beers] with them. Wood bats made a big impact on the game also; making it better.”

Jeff won’t get too far from the ballpark, as he now works as an umpire for both Greater MN Umpires and Northwest Umpires, working high school, legion and amateur games. He also plans to spend more time with his family, which includes 4 daughters and his wife Rena. He will miss the comraderie of his teammates, and also, “feeling the ball off the sweet spot of the bat,” he added.

On behalf of Irish fans, we wish both Wade and Jeff a wonderful retirement, and thank you for all the memories!