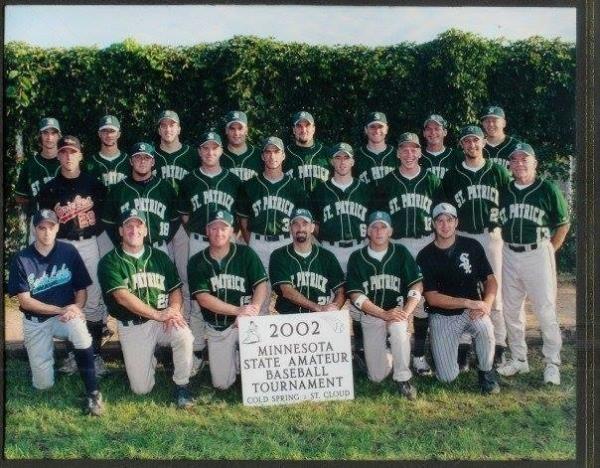 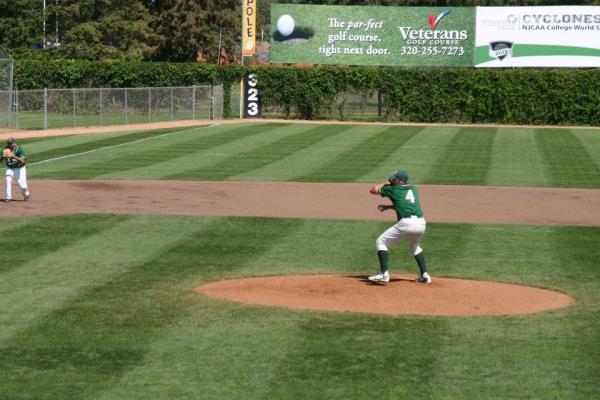 Bill Dunker has been playing amateur baseball in Minnesota for over two decades, becoming well-known for his dominant pitching performances. In that time he’s morphed, albeit slowly, from an 18 year old, 140 pound lanky mess of arms and legs, to an averagely stout man of 38 years. He’s played for three amateur teams, earning a total of 190 wins on the mound. His skill and longevity has led to one constant for Bill: he’s been busy in late August and early September. Remarkably, he’s been a player participant in 20 of the last 21 MN State Amateur Class C Baseball Tournaments.

Bill graduated from Jackson High School (pre Jackson Country Central) in southwest MN in 1997, completing his high school career playing for the great Tyrone Wacker (MN Amateur Baseball Hall of Fame 2010). In the fall of 1997, Bill would head off to Mankato State to pitch for the Mavericks. But as the summer began after high school graduation, Tyrone, along with Tom Schuller and Scott Bahr asked Bill to play amateur baseball with the Jackson Bulls. Bill was a Jackson Bull for three seasons, from 1997 – 99.

In his rookie season with the Bulls, they went on to play in the 1997 State Tournament, held in Delano and Maple Lake. Bill had just turned 18 that summer, but his first trip to the State Tournament as a player was secured. He recalls one of the Bulls’ match-ups in the Tournament, “We had a huge battle with Richmond that year and they had an awesome fan base. They still do actually. One of our guys got into a smack-talking match with their fans, all in good fun, and after the game they came up to him and shared beers with him.”

Jackson and Bill returned to the State Tournament in 1998 and 1999. In 2000, Bill moved on from Jackson and began playing with Eagle Lake, where he played from 2000-2003. That season, Bill was drafted by the Waterville Indians, making it four straight years at the tournament. In 2001, Eagle Lake didn’t make the tournament, and for some reason, Bill wasn’t drafted. It would mark the only time in the past 21 years Bill has not been a player participant in the MN State Amateur Class C Baseball Tournament.

With 2001 in the rearview mirror, Bill used 2002 as a turning point in his amateur baseball career. Bill was drafted by the St. Patrick Irish coming out of Region play. In St. Patrick’s opening game of the State Tournament against St. Francis, Bill entered the game in relief, and pitched 5 2/3 innings, only giving up 1 hit. Later in the tournament, he cemented himself in the history books, as he pitched the 17th (at the time) No-Hitter in State Tournament history, with a victory over Pierz. That year’s run with St. Patrick was one of the more memorable for Bill, but St. Patrick fell short on Labor Day weekend and bowed out of the tournament.

In 2003, Bill was drafted by the Austin-Hayfield Athletics and made it all the way to the championship game, but they were upended by Green Isle. To this day, it’s the closest he’s gotten to a MN State Amateur Championship. “I think I’ve finished in every possible position except champion. We always said, if you played Labor Day weekend, you had nothing to be ashamed about,” Bill added.

By 2004, life changes had Bill moving from southern Minnesota to the New Prague area. He was in need of a new team, and his past connections and good fortune with the St. Patrick Irish drew him to sign with the club. The Irish Manager at the time, Monte Hennen, recalls signing Bill, “We were happy to get him! He instantly became a very impactful player for us.” He was indeed very impactful for the Irish; St. Patrick would go on to participate in eight of the next 12 State Tournaments, with Bill at or near the top of the pitching rotation.

Current St. Patrick Manager John Johnson has played with, coached, and managed Bill during their time together with the Irish, and he knows the effect Bill had on the game, “In Bill’s prime, he had the ‘big game’ mentality and wanted the ball. Nerves rarely got the best of him. Bill was pig-headed and never wanted to have a coach walk to the mound. I recall comments from Bill, ‘if you are going to pull me, pull me, let’s not stand around and talk about this.’” Former teammate and coach with the Irish, Jeff Bjerke provided a similar sentiment, “He was and still is a ‘big game’ pitcher. I would go to battle with him any time or any place.”

The New Prague Orioles drafted Bill in 2013, when the State Tournament was in Delano and Maple Lake. Orioles Assistant Coach Nick Schoenecker explains why Bill was valuable, “He was a great pitcher, he was a veteran who had pitched in multiple State Tournaments and he was a baseball guy. We knew he was going to fit in on our bench and get along with everybody. We won our first two games that year and Bill pitched in relief in the 3rd round game against Jordan. We had some bad luck but Bill pitched well.”

Besides being a dominant arm on the mound, Bill was a gifted athlete who defended his position well and became a decent bat in the line-up later in his career. Hennen recalls, “I had seen him play a little before we drafted him and signed him, but when he started playing for St. Patrick, I realized he was extremely good on defense. He also works quickly. I’ve had many umpires joke they were happy to see he was pitching, because they knew it’d be a good and fast game.”

Schoenecker adds, “As good as he was at throwing the ball, he was also an excellent defender after the ball was pitched. He could cover a lot of ground on bunts and little nubbers that were in front of or to the sides of the mound. He likes to slide as he's fielding the ball and gets his body in position on his way up to make the throw. Nobody does it better than him.”

Bill realizes he’s had some good fortune over this long run, “I’ve been remarkably healthy injury wise, and I’ve had such good people around me. I’ve been able to take something away from all of them. Learning from coaches, veteran players on my own team and others, and even fans, I feel has helped me along the way. People like Wade Wacker and Pat Frank in the Jackson days, and Kevin Geislinger in Eagle Lake, and Monte Hennen, John Johnson and Jeff Bjerke now with St. Patrick. Those guys have all been there before me, and drawing off that can only help.”

The State Tournament has provided Bill with many battles, “I could tell a couple hundred stories probably. As far as teams are concerned, we bumped into Carlos in back-to-back years and played great games with them. In 2005, we played the Moorhead Brewers in a flat-out war. Every pitch had to be right because of all of their offensive weapons. Milroy too, but that one may be a little more personal just because I had played them so much even back in high school. There were no secrets, and nothing held back. You knew if you matched up with Milroy that would be a fight.” Individuals that came to mind include, “Jake Maros from St. Francis may have had the strongest hands I’ve ever seen at the plate. I gave up one hit to them, it was to him, on a shattered bat, and he smoked the pitch to right anyway. Adam Gregg from Maple Plain was such a warrior. Ace of their staff and tough as nails and hit in the middle of their lineup on some very good teams.”

Bill is still active for the Irish, but he also adds to his inning workload playing and pitching for the 35 and over St. Patrick Shamrocks. He’s helped guide that squad to three straight Class A Federal League Championships. He also is a valuable asset to the St. Patrick Athletic Association, serving as a past President of the Board, past youth team coach, coordinating umpires for youth games, and umpiring many games each spring and summer.

On what makes the State Tournament special, Bill says, “Every player on every team plays all summer to play there. The entire state of baseball gathers in one area for three weekends. It becomes a fraternity of sorts after a while. You run into people that you haven’t seen for a year or more, but you always have something to talk about. There are no strangers. I’ve been so lucky to play in 20 of them, given that I know people who have never played in one.

With this year’s State Tournament within his League, Bill hopes get back once again, and offers one final piece of advice, “When you get to the tournament, take some time to enjoy it, you may never play in one again.”